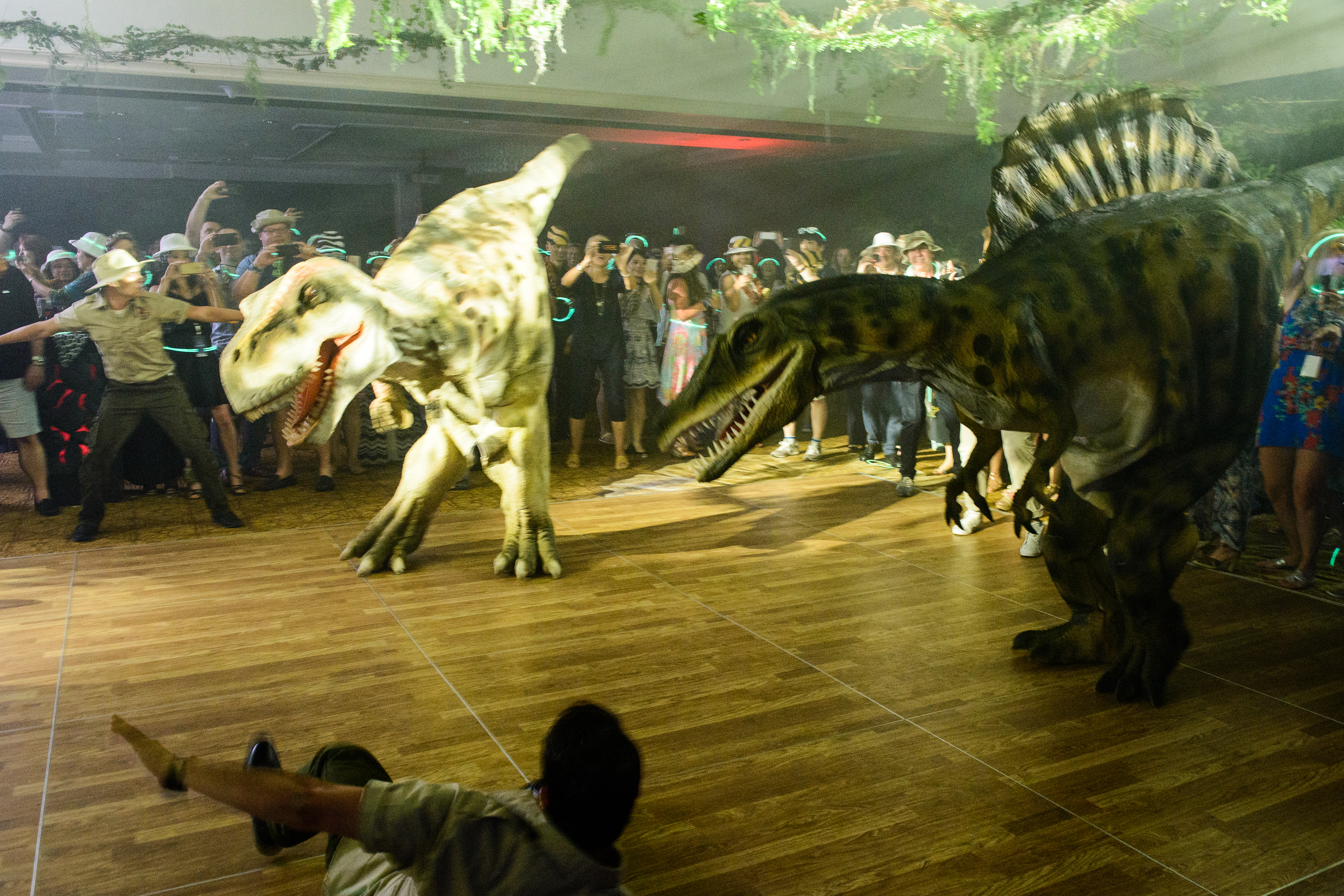 We are very proud that two of our 2016 events were honored with Gala Award Nominations.

We do feel that these events stood out and we are happy to share.

The Client: A global scientific instrument company.
The Guests: Top Performers of the sales force. 3000 employees worldwide compete all year to achieve the highest sales figures. The Top Earners win this annual reward vacation, with permission to bring one guest.

We were tasked to conceive and produce the closing night dinner and dance party, an evening that had to make a lasting impression on the guests.  We needed to achieve a huge “wow” on a small budget. This event motivates the sales force to try even harder in the coming year!

We decided to play off the existing environment and landscape as much as possible and presented the theme “Jurassic World”.
It seemed to fit perfectly as the movies “Jurassic Park” and “Jurassic World” had been global hits, were known to all guests and had been filmed right here on Kauai.

The theme was kept completely secret to the guests!
They assumed it was going to be a dinner and dance party in tropical setting; little did they know what was coming!

Those who really paid attention may have noticed a few hints around the hotel…for instance, what were those mysterious, giant footprints on the resort lawn?

But what were those grumbling background noises mixed in with the soundtrack?
Dinosaur grunts? No one was quite sure.

As guests enjoyed desserts, our Jurassic World Security Staff appeared, a bit uneasy and concerned as they anxiously wandered through the room warning guests of an unknown approaching danger. They handed out backpacks with necessary “gear” and told the guests to be aware and on the lookout for anything…unusual.

The guests laughed and took it for a light-hearted sketch.

Just as everyone was finishing dinner, we started the next phase of the buildup.

We added increased action and suspense to the transition from dinner to dance party.
Strange noises echoed through the air, heavy stomping stomps were heard from a distance! Our four Jurassic World staffers, now clearly agitated, once again ran into the room amongst the dinner guests.
They proceeded to inform the guests that the area was no longer secure and they needed to “evacuate” the area immediately!

Our guests quickly moved down the hall into the stunning jungle themed ballroom. They thought that the “evacuation” had been the shock element.
Little did they know, there was even more to come!

The dance party rocked as guests adorned themselves in their Jurassic gear and took photos of each other. The DJ had the music pumping. Everyone assumed that this was it: a fun dance party with Jurassic party gear.

The lights suddenly went down.
Strange, terrifying noises filled the room.  Dinosaur growls and screeches were heard as the video screen wall shook and flickered.
A tiled projection came to life: enormous, lifelike dinosaurs roared across the screens.
Side doors on either side of the ballroom opened and out of the darkness, two enormous dinosaurs charged into the room – one from each side. Their eyes were blinking ferociously and their mouths were snapping as they met in the center in the room.  The Jurassic World staffers attempted to keep everyone calm and yelled for the guests to ‘stay back!”

Amy Gale: “The surprise worked 100%. The guests had never suspected “real” dinosaurs to enter the room. Everyone had assumed that the “evacuation” had been the highlight of suspense and action. The Dinosaur Attack had never been done before at a corporate event and we had succeeded in keeping it completely secret.  Guests were screaming with delight! They really went crazy. After the “attack” our dinosaurs left the room and returned a little later to join guests for photo opportunities and even some dancing! Everyone wanted to get selfies with the dinosaurs. No one will forget this party! Two live dinosaurs turned this dance party into an unforgettable experience.”

The dinosaur troupe was extremely professional.  Their costumes were incredibly realistic and the operators within even use cameras to maintain visual perspective as they move. The eyes blink red and the mouths are fully articulated. The simulation is uniquely life-like. They are so convincing that even the client’s event professionals were blown away when they first appeared for ‘rehearsal’.

By creating the scenario of the 5-part multi-dimensional buildup, consisting of foot prints, 4 live actors, sound effects and video projection, to the shock reveal we built suspense and anticipation and turned the dinosaurs into a show.

We are happy to report that the client confirmed the positive feedback they received from guests after the program had concluded.

In order to pull this show off within the parameters of a small budget, we custom-tailored the entertainment and made maximum use of elements that were already in place.

Entertainment: music took a back seat to the dinosaurs. We saved on a band and
hired a top DJ who was perfect for the dance party instead.

Location: we used the indoor ballroom instead of an extra event tent to save more.
The staging was in place from a previous event.

All audio and video equipment was in place from a previous event for the same
client. We planned our setup time around the other event schedules to be able to reuse the A/V equipment.

The fire marshals and all event staff had been hired for the whole program and were
still available for the final night without incurring extra labor cost.

We worked magic with locally available elements and with graphics to create the
custom Jurassic décor.