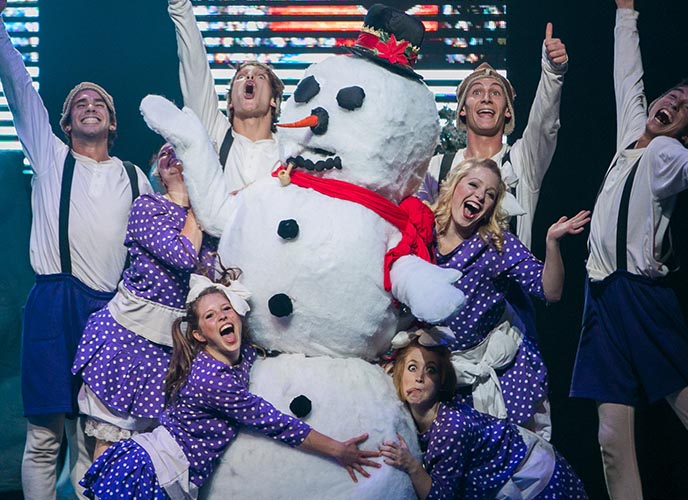 The 2016 Magic of Christmas Spectacular is nearly sold out for all performances, ending its annual run on Sunday, December 18th, at the La Mirada Theatre for the Performing Arts.

Sam Trego: “One of Southern California’s largest daily newspapers, the Orange County Register, raved “If you can see one holiday show this season, make it this one.”  I am happy to see my longtime friends and collaborators receive such critical and public accolades. It is so well deserved. They just always deliver a great show.”

It was in 1982, when Sam was in the group and the Founding Director Milton Anderson was trying out “new arrangements for a Christmas concept”.  That concept found Sam soon in the recording studio with the production of the album “Merry Christmas From The Young Americans” and then later in 1983 in the original cast of “The Magic of Christmas”, which has played annually ever since.  The show has evolved through the years to become one of the largest Christmas spectaculars produced in the world, rivaling Radio City Music Hall’s annual Christmas spectacular.

In 2016 a cast of 250 incredibly talented performers pays tribute to everything from a Detroit-style salute to “Snowtown”, to Pokemon, The Nutcracker, and a stunning concert inside a stained glass cathedral where you hear some of the most stunning performances of Christmas classics you will ever hear (think: Ave Maria, For Unto Us, Oh Holy Night)… with 250 voices that send shivers up and down your spine.

Join us as we celebrate Christmas in the northern mountains and a snow-covered town, skate over frozen ponds, build an enchanted snow man, cut down the perfect Christmas tree and snuggle cozily by the fire.

Enjoy the show within a show at our own “Holiday Inn” along with sleigh rides, ski slopes and small-town main street shopping while you hear the special sounds of Christmas at a country church.

This two-hour production featuring thousands of costumes, over 34 set changes and all styles of performance, is sure to be the perfect start to your holiday season.

“The Magic of Christmas” has delighted theater audiences in the Los Angeles area for over 30 years and is now available for theatrical and stadium tours. To book an hour long version for Corporate and Special Events worldwide, please contact their production partner: Imagination Entertainment!

Experience “The Magic of Christmas” for it is one of the most exciting holiday shows for special events, national and international tours.